Under Law Or Under Grace

Have you tried to be the perfect person God expects you to be and find you can’t do it? Maybe, you are living under the Law instead of under Grace. If you read the following, it might show you some things.

The Law of the Old Testament was absolutely unable to change us from within. In fact, until the Law came, God did not hold sin against man because there was no standard for accountability. But the Law did come. The God of Grace had given man a chance to realize his sinful condition for himself, but, instead, man had taken it as permission to sin.

“The Law isn’t based on faith. It promises life only to people who obey its commands” (Galatians 3:12, CEV).

When we follow the Law, all it can do is make us turn from sin for a time. It does not change our heart. What the Law did do is reveal our need for a Savior. Faith is not necessary to follow the Law. A heart change requires faith. When you live by the Law, you do not live by faith. You follow what is dictated and required. And you are judged and held accountable by it.

“Grace and truth atone for iniquity, and people turn from evil through fear of Adonai” (Proverbs 16:6).

Our Savior—full of grace and truth—has come. The penalty for our sin has been paid. When we receive Jesus, we are reborn to new life in Christ. Our hearts are changed by His Grace and not by the requirements of the Law. Trying to keep the Law does not make us right with God. The Law condemns bad behavior. Only Grace makes us right with God. Only His Grace and Truth give life.

“But he who is uncertain [about eating a particular thing] is condemned if he eats, because he is not acting from faith. Whatever is not from faith is sin [whatever is done with doubt is sinful]” (Romans 14:23, AMP).

It is obvious that you cannot sustain a relationship with God by keeping the Law. That is why Paul writes in Romans 6:14 that we are no longer under the Law but under Grace. Keeping the Law—doing things right for God—is the direct opposite of what Christ has done for you. Christ made things right for you. For the person who believes in Christ—who is made new in Him—keeping the rules does not create the need to live by faith. Keeping the rules only creates the need for more rule-keeping. Keeping the Law is not acting on faith. And whatever is not from faith is sin.

“For as many as are of the works of the law are under the curse; for it is written, ‘Cursed is everyone who does not continue in all things which are written in the book of the law, to do them.’ But that no one is justified by the law in the sight of God is evident, for the just shall live by faith. Yet the law is not of faith, but “the man who does them shall live by them’” (Galatians 3:9-12).

Paul said that “the law is not of faith.” Trying to be perfect by keeping the law places you under the judgment of the Law instead of under Grace. Romans 14:23 in the NKJV says, “Whatever is not from faith is sin.” When we accepted Jesus in our hearts that was a work of faith. We did not receive Christ by keeping the requirements of the Law. If we are trying to keep the rules instead of living by faith in the Grace of Jesus, we are missing the whole point of the love of God. We are trying to please God by living under the Law—and that is not of faith but is essentially a sin according to Galatians 3:12 and Romans 14:23.

The Mosaic Law is more than the Ten Commandments. There are hundreds of ceremonial rites and ordinances also in it. If you live under the Law, you must live by the whole law. You must keep it all perfectly. And that is impossible and self-defeating. If we live under the Grace of Jesus, we are free to live the righteousness He bought for us with His precious life. The Law is the standard for those who do not know Jesus. It brings them to repentance. We are convicted by the righteousness that Jesus has given us (John 16:8-9).

Being under Grace is not a license to sin. It is knowing who you are in Christ and being convicted by Truth in the Holy Spirit. Believers who are trying to keep both the Law and live in the freedom of God’s Grace experience condemnation—they feel what they try to do for God does not always please Him. You cannot live under both Law and Grace. It creates conflict and confusion. The Law gives power to sin (1 Corinthians 15:56). Grace is the freedom to live His righteousness.

Trying to live under the Law and trying to live under Grace at the same time will strangle our faith. It will create doubt in the choices we make. It will make us question our worthiness in Christ. When we are double-minded, we do not receive because we are not living by faith. When we doubt in the new person Christ has made us, we are living under two different Covenants—the first Covenant condemns sin and second Covenant forgives it. Are we trying to live by condemnation or by allowing the Holy Spirit to convict us with righteousness? You know which Covenant Jesus wants for us. He didn’t come into the world to condemn us but to save us (John 3:17).

Can you see the struggle? Yes, the Law is needed to convict the world of sin and the need for a Savior. But you are not the world. You are saved. You are under Grace.

“For sin shall not have dominion over you, for you are not under law but under grace” (Romans 6:14, NKJV). 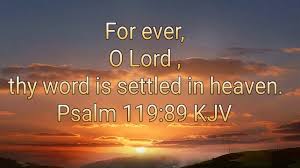