Dare to Believe Your Wounded Healer 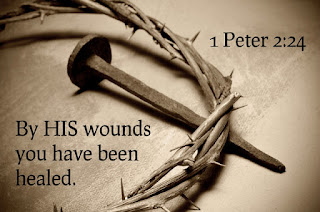 There was nothing you did to get God to save you. It was His gift. You were saved by God’s grace through childlike faith. And there is nothing you can do to get healed either. You receive healing just as you received forgiveness—by faith in God’s grace.

In these verses, David praises God for His redeeming grace. He encourages us to remember God’s benefits. But so many Christians live far beneath the benefits that God has for them. We should never forget that we are forgiven of all our sins—that Jesus has provided a finished and complete redemption to every believer. David also reminds us that not only are we forgiven but that we are also healed of all our diseases. Just as it is God’s will for us to be forgiven, it is also God’s will for us to have good health (3 John 2). God wills us to receive His love and grace for healing just as He wills us to receive His love and grace for the forgiveness of sin.

“Who himself bore our sins in His own body on the tree that we, having died to sins, might live for righteousness—by whose stripes you were healed” (Peter 2:24, NKJV).

Jesus took all your sins and diseases to the cross over 2000 years ago and paid the full price for them. Notice the verb tense “were healed” in 1 Peter 2:24 in the NKJV version. It reveals that healing has already been accomplished. By Jesus’ stripes, you are now healed. That doesn’t mean that sickness won’t come against you. But in the realm of God’s Truth, you are healed. You have God’s power to fight sickness just as you have His power to resist sin. Understanding who you are and what is yours in Christ helps you to fight and resist sickness from a mindset of victory instead of a mindset of defeat. Even when you are experiencing the physical onslaught of sickness, you can believe in your healing.

After you receive Christ’s redeeming grace, the enemy still tempts you with sin and comes against you with sickness. If you commit a sin, that is not the new nature God has given you. You can repent and be dead to that sin and alive in Christ. You can live His righteousness. In the same way, you can be dead to sickness and alive to healing in Christ. Being dead to sin doesn’t mean that it is impossible for you to sin. And being dead to sickness doesn’t mean it is impossible for you to get sick. If you can resist sin by the power of God, you can also fight sickness by the power of God. By the same grace of God that forgave you, you can also receive the healing Jesus died to give you.

Healing begins in your mind. It arises from God’s Truth that you believe in your heart.  If you can believe in God’s forgiveness, you can have faith in His healing. “Daughter, your faith has made you well,” Jesus told the woman who was weak from the loss of blood for many years. “Go in peace,” He said, “and be healed of your affliction” (Mark 5:34).

Jesus became wounded so that you can be whole. By His wounds, you are healed. Live each day by faith and not by sight or what you feel (2 Corinthians 5:7). Your faith takes the Truth of God’s Word and makes it yours. Healing is believed before it is received.

Dare to believe your wounded healer.