Take Off Your Shoes


When Joshua was near the town of Jericho, he looked up and saw a man standing in front of him with sword in hand. Joshua went up to him and demanded, “Are you friend or foe?”
“Neither one,” he replied. “I am the commander of the Lord’s army.”
At this, Joshua fell with his face to the ground in reverence. “I am at your command,” Joshua said. “What do you want your servant to do?”
The commander of the Lord’s army replied, “Take off your sandals, for the place where you are standing is holy.” And Joshua did as he was told.
—Joshua 5:13-15 NLT

The time has arrived for the Israelites to move forward and take Canaan. The fulfillment of their promise is just ahead. The Lord has brought them miraculously through years of wandering and complaining to this place. In Joshua chapter one, they had been told to be strong, courageous, and obedient. In chapter two, Joshua sent spies into Jericho to assess what they were up against, and they had been protected and helped by Rahab. In chapter three, God once more held back water—this time of the Jordan River—so that the Israelites could move forward to receive their promise. Now in chapter five, they have held Passover in preparation for the military invasion of Canaan.

Joshua looks up and sees a powerful man with a drawn sword, and he asks if he is for the Israelites or for their adversaries. The man replies that he is for neither, and then tells Joshua that he is the commander of the army of the Lord. The commander of the Lord’s army waits for Joshua’s reaction. Joshua has not yet surrendered to him in worship. He has not yet committed himself. The power of the Lord stands before Joshua saying, “I am here, surrender. Worship so that I may be your strength!”

Joshua falls on the ground before him in reverent worship, and then in surrender asks, “What do you want me to do?” The commander of the Lord’s army tells him to remove his sandals because the place where he is standing is holy ground. When Joshua removes his shoes, he honors the Lord’s messenger and the Lord Most High that he represents. It is an act of absolute surrender. With Joshua’s commitment, the answer is no longer, “I’m neither friend nor foe.”  It is, “I’m yours!”

Jesus stands before us, and says, “I am the Lord’s Son. I can’t fight your battles until you surrender to me.” He waits for us to remove our shoes and worship Him. He waits for our hearts, our commitment, and our trust. He longs to take us into our Promised Land, but He waits for our absolute surrender. With that surrender comes all of His power and His unfailing commitment to us. He says, “I’m yours, and all my power is yours.” Because of a divided heart—because of murmuring and complaining and non-commitment, the Israelites wandered in the wilderness for decades. If they had committed their hearts without wavering, those years could have been spent in the fulfillment of their promise.

What lies before you? What promise waits?  Is He with you? He waits in your presence wishing to be your friend—your power and protector—your provider—your healer—your victory. He waits for your worship and surrender. You are standing on holy ground in His presence. What will you do? Will you take off your shoes and worship Him? Or will you hesitate because you are not sure?

As Christ Has Loved Me

What kind of love do I extend? Do I love with the love of Christ? Jesus said to love my enemies; do good to those who hate me; bless tho... 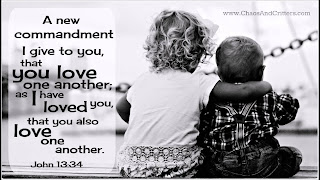