“My grace is sufficient for you, for my power is made perfect in weakness” (2 Corinthians 12:9, NIV).

The grace of Jesus Christ has the power to change every aspect of my life. The more I dwell on His love―the more I seek His truth―the more I allow His love and truth to impact my life―the less I am like me, and the more I become like Him. The closer I grow in my relationship with Him, the more I am aware of my lack of power to live a life that honors Him. The desire is there, but often His standard makes my own effort seem like a failure. The sense of my own inadequacy reveals that I need to surrender more of my life to His life-changing power. It is what I do with that sense of failure that makes the difference in my life. If I allow my failure to define who I am, then I will remain weak, defeated, and a failure. But if I yield that failure to His refining process, my weakness is taken over by His strength. His power changes and perfects my life. I grow stronger in my relationship with Him. The failure which has once defined and defeated my life, is surrendered to His power. He controls what I am unable to control.

Without God's standard–His Word–to meet in my life, there will be no sense of failure. I will not understand the conviction with which He can change me. However, it is when I am growing in my relationship with Christ and seeking Him, that His standard convicts my life. A sense of failure can inspire me instead of defeating me. When I realize my weakness, I know that I need His power. Instead of wallowing in my sense of failure and running from His grace, I run to the Savior who has not only revealed my failure, but who also is the only answer for it. I constantly seek more of Him. I learn that His grace is greater than any failure or sin. His grace changes my life. Living in His strength becomes easier as time passes. His power overcomes my weakness. Instead of failure, I persevere and receive greater spiritual maturity.

Are you also tired of failure defining who you are? Be committed and be diligent to seek Him and grow in His grace. “Let perseverance finish its work,” James writes, “so that you may be mature and complete, not lacking anything” (James 1:4, NIV). If you allow the Holy Spirit to prune away those weak areas, you will know greater spiritual strength and abundance. You will be perfected by His grace and love. His holy shears, which prune and sometimes cut painfully, will one day bring forth the most joyful and abundant harvest. You will realize in the weakness that you have surrendered to His grace, He has made you strong.

—Now may the God of peace Himself sanctify [set apart] you completely; and may your whole  spirit, soul, and body  be preserved blameless ... 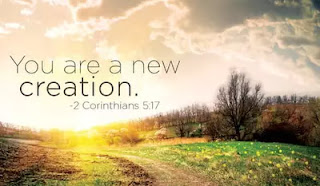