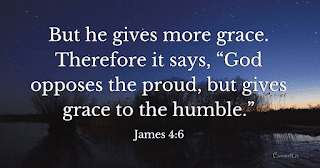 Grace is the unearned and undeserved favor of God that is offered to us in Christ. But many believers spend their lives without experiencing the benefits of God’s grace that they received when they were born again. Grace asks for our response. When we don’t understand that God wishes us to respond to His grace in faith, we don’t experience His grace working in our lives.

In the Word, grace is shown to be more than just unmerited favor. In Ephesians 3:2, Paul referred to his ministry to the Ephesians as a dispensation or the privilege of grace. In Romans 12:6-8, Paul spoke of the gifts of grace as something to be exercised in ministry to others. “As each one has received a gift,” Peter said, “minister it to one another, as good stewards of the manifold grace of God” (1 Peter 4:10, NKJV).

Grace is not only God’s unmerited favor but His power at work within us.

“But He gives more grace. Therefore He says: ‘God resists the proud, but gives grace to the humble” (James 4:6, NKJV).

The grace of God is received with humility. If we don’t understand that humility releases the power of God, then pride in ourselves will keep us from experiencing His grace. This verse in James says God gives more grace. If it is possible to have more grace, then it is also possible to have less grace. God makes available His grace, but we determine how much or less of it we will experience.

This world is performance-based. It rewards us on how well we perform. Pride keeps us competing to get ahead and be the best. God's Kingdom is the opposite. His grace is unearned and not based on us at all. The least is the greatest. Humility is knowing who you are in Christ—that you don’t have to keep performing well enough to win God’s love, acceptance, and favor. You know that His grace loves you, accepts you, and favors you.

Grace asks for your response to believe by faith. Are you trying to win God's love and acceptance based on your performance in serving Him? Do you believe if you work harder and harder for Him—do more and more—give more and more that He will approve and favor you more? That’s pride and seeking a reward that comes from the need to prove to yourself that God loves you. You don't have to prove yourself to God. You don’t have to prove that He loves you. He already approved of you on the Cross. Christ favored you on the Cross. There is nothing more He could have done for you.

Grace asks us to respond to a revelation of love that is almost too good to be true. But it is true because it is the love of the Gospel. We must respond in faith—not of our own efforts—but in humble acceptance of His power within us, believing that where God calls us, He is responsible to provide all that is needed.

Humility doesn’t focus on self and its achievement. Humility surrenders to Christ’s achievement on Calvary. It places the well-being of others ahead of its own. When we understand that humility doesn’t exalt itself and doesn’t have to earn what has already been earned in Christ, we can receive more grace to empower our lives. And ministry to others will flow in His power. We will become good stewards of the manifold grace of God.