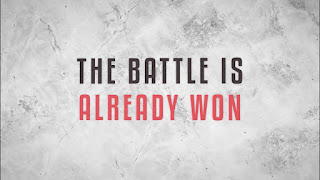 Are you in a battle?  Your battle not only belongs to the Lord, but He has already won it.

When David spoke to Goliath, he addressed the oppression of evil coming against Israel.

“You come to me with a sword, with a spear, and with a javelin,” David told Goliath, “but I come to you in the name of the Lord of hosts, the God of armies of Israel, whom you have defied” (1 Samuel 17:45)!

The enemy might come against you with lies of failure, loss, sickness, and circumstances, but you come against him with the power of the name above all names—Jesus! God has put everything under Christ’s authority (Ephesians 1:21-22). In your human weakness, Jesus is strong. The power of the Cross and Resurrection have spoken life. The Grace of Jesus has already conquered your sin, and sickness, and blessed you (Ephesians 1:3). God declares that His complete work of redemption is finished (John 19:30, 1 Peter 2:24). His Word affirms that this is true. The Son became flesh because only as a human being could He give His life for our sins and sicknesses and every destruction of the enemy that comes against us. In dying for us, Jesus broke the power of the enemy, the author of death. God, the author of life, sent Himself—His Word (John 1:1) and healed us from all our destructions (Psalm 107:20).

“This day the Lord will deliver you into my hand,” David told Goliath. “Then all this assembly shall know that the Lord does not save with sword and spear; for the battle is the Lord’s, and He will give you into our hands” (1 Samuel 17:46a, 47).

Yes, your battle is God’s. You don’t own it. Time is nothing to God. He doesn’t see past, present, or future failures, sicknesses, and circumstances. He sees the timeless and finished healing work of His Son in you. God sees you whole and healed and forgiven and made new by the Resurrection power of His Son’s perfect and complete sacrifice.

Do you see your battle already finished—over with—done?  In your born-again spirit, you have received the final victory. It’s time to be renewed by the Word and transformed by its Truth (Romans 12:2). God wants you to receive the of revelation who He is in your life (Ephesians 1:17).

David only had the promise of a battle that he believed would be won. But David believed that the battle belonged to the Lord. We have the promise that all our battles are already won! Sin and sickness and death are overcome! But like David, do we believe it?

When you believe in your heart that the battles of your life are already won, you live by faith in God’s finished work of Grace. Your promises are real even when you can’t physically see them. You walk by faith and not by sight.

When you spiritually grasp the revelation from the Holy Spirit that Grace has already won your war over sin and sickness and all the power of the enemy, you believe it in your heart. And when you believe in your heart that you are victorious, you receive out of the blessings Jesus purchased with His life.

The glory that God gave Jesus now lives in us. He is in us, and we are in Him. He perfects us as one. The power of the Holy Spirit rises from within your heart when you believe. All things are possible to the one who believes. Your battles are won because He is in you, and you are in Him.

“Therefore, if anyone is in Christ, he is a new creation; old things have passed away; behold, all things have become new” (2 Corinthians 5:17).

You are new in Christ! There is nothing you must do to win God’s favor! You already have it. Jesus won it for you. Continue to believe the Truth of His Word. As you grow in the knowledge of His Grace, His Truth will set you free from the lies of the old person you once were. You will know your new identity—who you are in Christ! Forgiven! Healed! Whole! You are an overcomer in Him!

As He is in this world so are you (I john 4:17). You have beheld His glory, full of grace and truth. Allow the Word to transform your perspective!  Believe in His life that is within you. And according to your faith, you shall receive (Matthew 9:29). 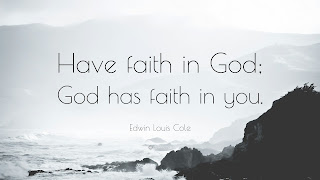