Each of us at some point will face a Red Sea. It will be something harder than we ever imagined. There will appear to be no way through or around it. It will appear that there is no answer. But just as the Lord parted the Red Sea for His people fleeing Egypt–just as He dried it up so they could move safely forward–just as He provided what was necessary at their most desperate moment, He parts the Red Sea and makes a path for His children now.


Moses never failed in trusting God. With the Red Sea in front of him and the Egyptians advancing from behind, he stood with the Israelites at the very edge of what appeared destruction. He had followed the Lord's leading, and now there seemed to be no hope. There was no visible escape. There was nothing but his faith in the Lord who had brought them to this place. Moses had promised God's people to lead them to freedom. The Red Sea rising ahead was not freedom; it was sure death. Yet Moses believed God would not fail in His promise. “'Do not be afraid,' Moses told the Israelites. 'Stand firm and you will see the deliverance the Lord will bring you today. The Egyptians you see today you will never see again. The Lord will fight for you; you need only to be still'” (Exodus 13:13-14, NIV). Moses told the Israelites to be still and wait for the God to fight the Egyptians, but God asked for something more. “Then the Lord said to Moses, 'Why are you crying out to me? Tell the Israelites to move on. Raise your staff and stretch out your hand over the sea to divide the water so that the Israelites can go through the sea on dry ground'” (Exodus 14:15-16, NIV). God said to move on in faith into what appeared destruction, and He would give them a way of escape. He would also destroy that which had driven them to the very edge.


When faced with our Red Sea, we sometimes try to pull back. Perhaps we see it rising in the distance, and we turn from its imposing presence. But the army of life presses us closer, and we cannot turn back. Suddenly we stand the edge. We believe that there is no way to go further, and there is obviously no retreat; we give up and are paralyzed by our fear. To experience freedom, we must move into our Red Sea. It is at that moment when circumstances allow no retreat, that we must go forward into the unknown for God to part the waters and make a way through it. That imposing Red Sea presents the greatest fear. But without facing the fear and moving right through it with God's help, we will never overcome that which has driven us to the very edge of ourselves.

My Red Sea lies ahead. Circumstances press from behind. I know that I must face my Red Sea. There is no escape. I can either allow it to paralyze me, or I can step forward in faith and allow God to part the waters. I can either try to control what I cannot control, or I can release my fear to God and move forward in faith. At the very edge, I make my decision. It is not only the edge of my Red Sea; it is the edge of myself. I know that there is nothing that I can do. If I step into the unknown, I will discover the power of God to strengthen and deliver me. Believing and trusting that the waters will part, I will go forward through what otherwise might destroy me. It is there in what appears destruction that I experience His power to deliver and even change the circumstances which have driven me. It is there in the depths of my fear that I discover in letting go, I find Him. I find His peace, and the pure joy of victory.
at May 30, 2015

When you believe and envision the promise God has for you, you are confident and convinced that God will provide it. But confident hope is... 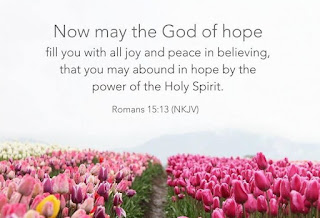