God Is For Us 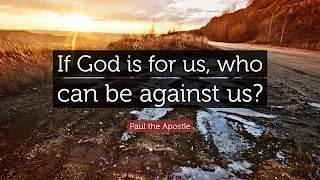 God is not the author of evil. He doesn’t make His children sick or hurt them to drive them closer to Him. It is our choice whether we have an intimate relationship with God or wait for something like sickness or loss to make us turn to Him. But don’t blame bad things that come against you as being sent by God to wake you up. You can worship Him when all is well in your life and be close to Him. You don’t need anything bad to happen to get you there. The enemy is the one who tells you that God is going to do something terrible to you to bring about something good. Does that make any sense? If you wait for something terrible in your life to drive you to God, you miss the power of His presence. You could have enjoyed it all along.

Yes, God can take whatever the enemy sends to steal, kill, and destroy and turn it around for His purpose. “And we know that all things work together for good to those who love God, to those who are the called according to His purpose” (Romans 8:28, NKJV).  “Watch me!” God declares. “Watch me take the very thing the enemy tries to do and redeem it with the power of my Word.” When you touch God’s Truth with your faith, you become more than a conqueror! No matter what society, the enemy, or anyone throws at you, your God is good. He can breathe on any attempt to harm you with His precious mercy and power and bring forth good.

God knew you before the creation of the world. He formed and created a plan for your life. God had already planned the gift of His Son and had a desire for you to know Him. He predestined you to know Him and to conform to His image. “I want you to know that when I look at you,” God says, “I see my Son. And you look like Him.”  God wants you to understand that you have the identity of His Son living inside of you.

“What then shall we say to these things?” (Romans 8:31a, NKJV). Paul asks a crucial question here. “Do you believe the things God says about you—that you are called, justified, and glorified?” The Word can declare these things about you, but until you take ownership and believe it, they have little power in your life.

What is your response to who Jesus says you are? This is where who you are in Christ comes down to your personal relationship with Him. No one else can respond to Romans 8:30 for you. You can say, “God saved me but to believe I’m called, justified, and glorified. Filled with the power of God? I don’t know about that.” And with this response, you close the door to God’s image of who you are in Christ.

OR you can say, “You know what I say to this? I am called. I am justified. I am glorified with the Spirit of God living in me. I have the shed blood of Jesus, dying, and then living again within me. So what do I say? I am forgiven. I am whole. I am healed. I am delivered. I see myself as God sees me. This is true for me now! Not tomorrow or the next day. It is true now!”