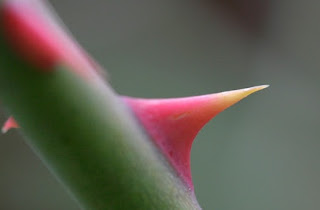 If I wanted to boast, I would be no fool in doing so, because I would be telling the truth. But I won't do it, because I don't want anyone to give me credit beyond what they can see in my life or hear in my message, even though I have received such wonderful revelations from God. So to keep me from becoming proud, I was given a thorn in my flesh, a messenger from Satan to torment me and keep me from becoming proud. Three different times I begged the Lord to take it away. Each time he said, "My grace is all you need. My power works best in weakness." So now I am glad to boast about my weaknesses, so that the power of Christ can work through me.

Years previously to writing this Scripture, Paul found himself in the third heaven. He didn't know if he had this incredible experience in or out of his body. But what Paul did know is that he was caught up in paradise and heard things so astounding that there were no words to express it. No human would be allowed to share what He had experienced (2 Corinthians 2:1-4).

"That experience is worth boasting about," Paul wrote, "but I'm not going to do it. I will boast only about my weaknesses" (2 Corinthians 2:5, NLT). In 2 Corinthians 12:6-9, Paul said that he didn't want any credit for God's wonderful revelations. He also wrote that he had been given a thorn in the flesh, a messenger from Satan to torment him and keep him from pride.

For most of my life, I've heard that the thorn in Paul's flesh was a sickness God sent Paul to keep him humble. But in meditating on this Scripture, I couldn't ignore the referral to Paul’s thorn as being “a messenger from Satan.”

God is love. He is not the author of sickness. Sin came from man's fall in the Garden, and sickness came from that original sin. Sicknesses were curses listed in Deuteronomy 28 where a man could never live up to God's standard. But Jesus changed everything the Old Covenant declared as punishment when he became a curse for us and redeemed us from the curses of the Law (Galatians 3:13). Under the New Covenant grace of Jesus, sickness is no longer a curse. When sickness comes against us, it is not from God. Paul's thorn in his flesh wouldn’t have been a sickness sent to him from God. Paul, himself, referred to the thorn in the flesh as "a messenger from Satan" to torment him and keep him humble.

"Concerning this thing," Paul wrote, "I pleaded with the Lord three times that it might depart from me! And He said to me, 'My grace is sufficient for you, for My strength is made perfect in weakness.' Therefore most gladly will I rather boast in my infirmities, that the power of Christ may rest upon me" (2 Corinthians 12:8, NKJV).

The Lord refused to take away the messenger of Satan and told Paul that His grace was sufficient to handle the enemy’s torment. God has given us the authority to stand against Satan. God doesn't refuse to heal illness. If God did refuse to heal illness, then the phrase "by His stripes, you were healed" (1 Peter 2:24) wouldn't be Truth in God's Word! And God's Word is Truth. Sickness was also never listed in Paul's list of trials he faced in 2 Corinthians 11:23-28.

The phrase "thorn in the side" is found in Numbers 33:55 and Judges 2:3, and it refers to enemies that were a torment to Israel. Paul's usage of this phrase is significant in regard to his own thorn in the flesh being "a messenger from Satan" (his enemy) sent to torment him and keep him humble in his ministry.

God could have banished Satan from the world, but he didn’t. However, God gave us a defeated enemy at the Cross, and the authority to deal with him. Paul knew this. Paul knew that the strength God gave him in his weakness made him more than a conqueror over his tormentor. The grace of God is always more than enough. Paul was glad to boast in his weakness so that the power of Christ would be revealed in his life.

Sickness never brings glory to God. If it did, then Jesus wouldn't have freely healed those who came to him. Jesus never refused to heal. He healed without any conditions. God's healing of sickness brings glory to His name, and God desires to be glorified.

Paul lived the healing glory of God. His tormentor, a messenger from Satan, repeatedly came up against the power of Christ in Paul. Paul's humility was one born of hard-fought battles against Satan—not of illness from God. Please don’t ever attribute pain or illness to God, who loved you enough to purchase your healing with the stripes He bore. In our weakness, Christ is strong within us. And we are also more than conquerors.

God is our Abba father—our healer—the New Covenant lover of our souls.