PART OF THE REMNANT

“The Lord saw how great the wickedness of the human race had become on the earth, and that every inclination of the thoughts of the human heart was only evil all the time. The Lord regretted that he had made human beings on the earth, and his heart was deeply troubled. So the Lord said, ‘I will wipe from the face of the earth the human race I have created—and with them the animals, the birds and the creatures that move along the ground—for I regret that I have made them’” (Genesis 6:5-7).

There have been times that I have wondered if God regretted making me–times when I knew that I had fallen short of who He had created me to be. Many times we don’t take responsibility for our own actions. In fact, we fault others without looking inside our own heart. When God looked at His creation He saw what was in their hearts. When He looks at me and when He looks at you, He sees our hearts.

I regret the times I have failed Him, but I am thankful, that just like He saved that remnant from the flood, He rescues me from the waters that would drown me. Just as He made a covenant with the remnant He saved then, He makes a covenant with those He saves now. “I now give you everything,” God said to Noah (Genesis 9:3). Now He says to us through the sacrifice of His son, “I have given who I am for you; I, who had no sin, became sin, so that you may be free.”

Today I look inside my own heart, and realize that He gave His life so that I might not have to battle the ugliness of my past–of its remembrances. Today I give Him any thought that is not of Him, and any feeling that would destroy the closeness of my walk throughout the day. I want to be part of the remnant that believes and is saved.

In the parable of the prodigal son, the father tells the son who has remained faithful, “you are always with me, and everything I have is yours” (Luke 15:31). God tells His child who remains faithful the same thing. But how wonderful to know that He also says about the other son who had been lost that he must “celebrate and be glad, because this brother of yours was dead and is alive again; he was lost and is found” (Luke 15:32).

I’m been lost and now I’m found. Have you been found? Are you part of the remnant who believes and knows that God has given everything so can be free of the battles in your own heart? There is peace in your storm, and it comes through Him. Just as a dove brought a sign to Noah that the promise of life was still real, His Holy Spirit comes to you, and brings promise of new life.

Put on the Shield of Faith

To fight the good fight of faith, you have to deliberately choose to put on the armor of God. The Word of God is your Truth to stand prayi... 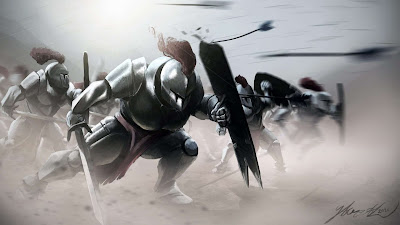