Receive the Freedom of His Grace 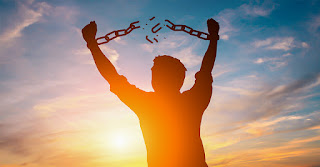 One day I awakened to something new about my relationship with Jesus. I realized the Grace of Jesus had already taken care of every issue in my life—had supplied all my needs—had healed me in ways I had never dreamed. This revelation didn't happen when I believed Jesus was my Savior, or even when I became filled with the Holy Spirit. This awakening to His Grace had been growing through the years. I began to understand Scripture as never before. Jesus revealed His love to me right through His Word. And His love was unrestrained and rich and life-giving. I wanted to receive and receive it until I could contain no more.

“You have not received a spirit that makes you fearful slaves. Instead, you received God’s Spirit when he adopted you as his own children. Now we call him, ‘Abba, Father’” (Romans 8:15, NLT).

"Abba" means father in the Hebrew and Aramaic languages. It is a name that reveals child-like trust. "Abba" is often translated as "daddy."  When God is our Abba Father, we have child-like faith in Him. He is a loving father to us. We can trust Him with anything.

For years, I had problems seeing the Old Testament God as being the same God as my loving Abba Father. I could never reconcile the God of retribution in the Old Testament with the God of Grace and unconditional love in the New Testament. Then one day, I again read Romans 6:14: “Sin is no longer your master, for you no longer live under the requirements of the law. Instead, you live under the freedom of God’s grace” (Romans 6:14, NLT).  And something changed in me.

The Holy Spirit began a journey of revealing His Truth that unfolded over the next two years. I had always known in my head that Grace had fulfilled the demands of the law, but I had never allowed that Truth to set my heart free. I didn’t need to carry shame as payment for sin. I didn’t need to struggle with the fear of punishment from my God. I didn’t need to try to balance law with Grace in my mind. Jesus had made the payment for my inability to live a perfect life.  I no longer lived under the law's requirements but was free to live in the freedom of God's Grace. My struggle to be righteous was missing the understanding of the Cross. Jesus was the fulcrum—where Jesus fulfilled the requirements of the law that I could never fulfill. The Cross had taken care of all sin for all time. Jesus had given me His righteousness. When I grasped that no matter how hard I tried to live righteously, I would fail, I finally let go and let God love me. I irrevocably understood that my goal was to surrender and allow Him to live righteously in me. I became free from the bondage of the law. I knew I was under His Grace.

“If you are trying to make yourselves right with God by keeping the law,” Paul wrote, “you have been cut off from Christ! You have fallen away from God’s grace” (Galatians 5:4, NLT).

How long had I tried to make myself right when His death had made me right! How long I had dealt with feelings of guilt and shame of not being good enough! When Jesus said on the Cross, "It is finished," there was nothing more for me to do but believe in Him and allow the Holy Spirit to do the work in me. Repentance wasn’t scourging myself with feelings of shame. Repentance was a decision to turn entirely away from wrongdoing and never go back to it. No longer did I need to beat myself up when I failed. If I tried to make myself right with God, I would be cutting myself off from Christ. Struggling to make myself right wouldn't keep me from falling back into sin. Working to make myself right with God was falling away from the understanding of what Jesus had given me on the Cross. I was awake! The Holy God of retribution in the Old Testament finally gave way to the God of Grace in the New.

God became my Abba Father of love and forgiveness. When Jesus died for me, He adopted me as His child. The love of the Cross opened access to my Father. I discovered a deeper intimacy and trust. I found that His discipline was never harsh but made as a loving parent guiding His child in spiritual growth. I understood that the gift of His Grace was freedom from the feelings of shame and guilt, which had bombarded me. I was free to receive His Grace and love as never before. And with this awareness, I experienced His peace and joy. His Grace alone was the answer I needed.

Have you grasped this kind of Grace? Are you tired of striving and failing? Struggling to be perfect where only Christ can bring perfection? Allow the Holy Spirit to reveal the Truth about His Grace in your life and what it means in your relationship with Him. You don’t have to live in fear of failure and losing His love. He is no longer the God of retribution. God is love.

“When we place our faith in Christ Jesus, there is no benefit in being circumcised or being uncircumcised. What is important is faith expressing itself in love" (Galatians 5:6, NLT). You don't benefit from what you do, Paul is saying. What is important is the faith you have in Jesus being expressed in you as unconditional love. You benefit from who you are in Christ.

Your Abba Father is satisfied with the gift of His Son’s life for you. There is nothing more to be done. Draw in His Truth and receive the freedom of His grace.