“My grace is sufficient for you, for my power is made perfect in weakness” (2 Corinthians 12:9, NIV).

The more I think about His love—the more I seek His truth—the more I allow His love and truth to impact my life—the less I am like me, and the more I become like Him. The closer I grow in my relationship with Him, the more I am aware of my lack of power to live a life that honors Him. The desire is there, but often His standard makes my own effort seem like a failure. The sense of my own inadequacy reveals that I need to surrender more of my life to His life-changing power. It is what I do with that sense of failure that makes the difference in my life. If I allow my failure to define who I am, then I will remain weak, defeated, and a failure. But if I yield that failure to His refining process, my weakness is taken over by His strength. His power changes and perfects my life. I grow stronger in my relationship with Him. The failure which has once defined and defeated my life, is surrendered to His power. He controls what I am unable to control.
Without God's standard to meet in my life, I will not have a sense of failure. I will not have conviction that changes me. However, it is when I am growing in my relationship with Christ and seeking Him, that His standard convicts my life. A sense of failure can inspire me instead of defeat me. When I realize my weakness, I know that I need His power. Instead of wallowing in my sense of failure and running from His grace, I keep seeking more of Him. I learn that His grace is greater than any failure or sin. His grace changes my life. Living in His strength becomes easier as time passes. His power overcomes my weakness. Instead of failure, I learn spiritual growth.
Are you tired of failure defining who you are? Be committed and be diligent to seek Him and grow in His grace. Let what He began in you grow until the day of His return.
©2017 Lynn Lacher

My little children, let us not love in word or in tongue, but in deed and in truth. And by this we know that we are of the truth, and sh... 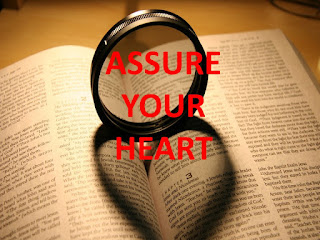