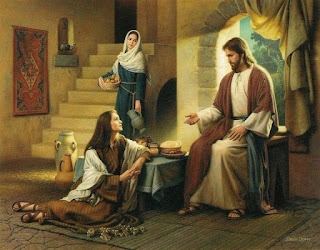 As Jesus and the disciples continued on their way to Jerusalem, they came to a certain village where a woman named Martha welcomed him into her home. Her sister, Mary, sat at the Lord’s feet, listening to what he taught. But Martha was distracted by the big dinner she was preparing.

She came to Jesus and said, “Lord, doesn’t it seem unfair to you that my sister just sits here while I do all the work? Tell her to come and help me.”

But the Lord said to her, “My dear Martha, you are worried and upset over all these details! There is only one thing worth being concerned about. Mary has discovered it, and it will not be taken away from her.”

Martha was concerned about a dinner she was preparing for Jesus. Her attention was on what she had to do to get things ready. Mary, her sister, sat at Jesus' feet, listening to His every word. Martha came to Jesus and complained that Mary needed to be helping her. Jesus told Martha that she was upset over all the details, and there was just one thing over which she should be concerned. And then he said something that must have upset her even more. “Your sister, Mary, has discovered it, and it will not be taken from her.”

Martha’s focus was on what was physically needed by Jesus and His disciples. After all, that was a pretty large entourage, and they needed food. Someone had to be in control and plan accordingly. Mary did not see the large group. Her attention was only on Jesus. Mary was spiritually hungry for everything He had to say.

Martha was upset that Mary was not helping her, but I believe her hurt was more than that. I think she was jealous of the spiritual hunger Mary had. Martha was preparing a meal that she hoped met Jesus' approval. Now her sister just sat there soaking in His every word. On top of all that, Jesus had just said Mary had discovered what was more important!

Where are we in our relationship with Jesus? Do we labor like Martha seeking His approval for what we do? Or do we bask in His presence like Mary? Do we hang on His every word knowing that He has already approved of us? Food was necessary for Jesus and His disciples, and Martha rightfully understood that someone had to be responsible for its preparation. But her preparation was a control issue for her. Martha believed that Mary had no right to bask in the Lord’s presence when she had no time to spend with Jesus.

Martha could only see what was needed. Mary could only see Jesus. Martha was in control. Mary surrendered.  What we do for Jesus is not as important as the time we spend with Him. We can become so busy working for Him that we unintentionally place Him second behind things we believe must be done. Nothing is more important than sitting at His feet and listening to His every word. Intimacy with Jesus does not happen by fixing a meal. Intimacy is only real in His presence.

His Truth in Your Heart

But the natural man does not receive the things of the Spirit of God, for they are foolishness to him; nor can he know them, because they ...