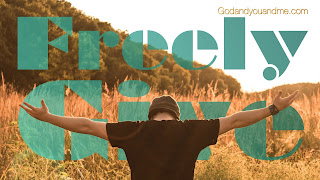 Go and announce to them that the Kingdom of Heaven is near. Heal the sick, raise the dead, cure those with leprosy, and cast out demons. Give as freely as you have received!

Jesus called his twelve disciples together and gave them authority to cast out evil spirits and heal every kind of disease and illness. He instructed them to tell the people of Israel that the Kingdom of Heaven was near and to give as freely as they had received.

Before Jesus ascended to His Father, He told the disciples that now His message of redeeming love was no longer just for the people of Israel. They were to go into all the world with it. The Holy Spirit came at Pentecost, and His power surged within the disciples, turning a frightened group into a powerhouse of ministry to tell the world Christ's message. The same authority that Jesus gave the disciples became real within us when we believed in the finished work of Jesus on the Cross for our sins. The power to live in His authority is ours in the Holy Spirit.

Heal the sick? Raise the dead? Cure diseases? Cast out demons? Jesus told the disciples that they would do greater things than he had done. These words still ring true today. Do will live “less” than what God has given us?  The Kingdom of Heaven is not just near. When Jesus died and rose again, His Kingdom came to live in the heart of each believer. It lives in us. But do we get it?

Did salvation fall on us?  No!  We acted in faith to receive it. Did healing the sick and curing diseases fall on the disciples? No, they had to exercise what Jesus had given them. We freely received salvation and healing when Jesus gave His life for our sins. We didn’t have to pay for our salvation or be good enough to receive it. We don’t have to beg for healing. Christ's atonement healed us, too. Just as the disciples, we freely give what Jesus has given us. And like the disciples, we must exercise what we have received by faith.

“As we live in God, our love grows more perfect. So we will not be afraid on the day of judgment, but we can face him with confidence because we live like Jesus here in this world” (1 John 4:17, NLT).

How did Jesus live in this world?  He was humble, but did He lack confidence? No, Jesus was confident in the authority that His Father had given Him. Did He exercise that authority? Yes, He did. Jesus healed the sick and raised the dead. "As He is," the NKJV says, "so are we." Do we live as Jesus lived in this world? Do we practice the truth of our salvation? As we live in God, His love gives us more confidence. Belief in His power within us grows. We stand before Him in the humble assurance of His most costly gift. The same power that rose Jesus from the grave lives in us.

Jesus’ kind of faith lives inside of us—faith that believes and knows the promises of God. We believe in the healing that Jesus has bought with His precious blood. But faith requires action. We have to act upon what we have humbly received. “Life and death is in the power of the tongue” pronounces Proverbs 18:21 (NKJV). Having received Jesus and His power, we speak His healing life to ourselves and to others. Yes, we have received, so freely we give.

“Today I have given you the choice between life and death, between blessings and curses,” the Lord says. “Now I call on heaven and earth to witness the choice you make. Oh, that you would choose life, so that you and your descendants might live” (Deuteronomy 30:19, NLT)!